A national survey-based campaign is being carried out for ground-truth in activity data and assumed parameters in emission inventory calculations. 14 NCAP-COALESCE partner institutions are participating in this survey at Pan India level. The survey districts and questionnaires were finalized upon through discussion among all the partner Institutes. Selection of the survey districts/ villages to capture the pan-India diversity in biomass fuels used for cooking, heating and lighting in residential sector is based on district/village level data (Census, 2011), along with agro-climatic information (ACRP, 2006) for residential cooking; that in agricultural residue burning practices is based on district-wise crop production data (OGDP, 2015) of nine target crops whose residue is identified as subject to field burning (Pandey et al., 2014; Sahai et al., 2011; Jain et al., 2014). About 25-35 household surveys each, from about 300 villages and 10-15 agriculturist surveys each, from about 75 villages, will be made across the country. Activity data related to brick production in traditional fired-brick kilns, will be obtained from surveys in districts located in states which account for the largest brick production, different key kiln technologies and a variety of fuel mixes and major districts therein are identified. Ground-truthing of the presence of the brick kilns is done through local investigation and site visits, to select about 30-35 brick kilns each in 72 districts for survey. Among these list of districts 14 survey districts are considered from the 115 most backward districts in India identified by Niti Ayog in the country (Niti Ayog, 2017). Selection of cities for vehicle surveys was made based on city classification by Tier and type of vehicles, based on vehicle classification (Ministry of Road Transport and Highway, 2013). Vehicle classification includes vehicle category (transport and non-transport), vehicle type (duty, fuel, number of wheels and axles) including 2, 3, and 4-wheelers vehicles and fuel type (Auto Fuel Vision and Policy 2025, 2014) including Bharat Stage categories (BS-I, BS-II, BS-III, BS-IV) powered by including diesel, gasoline and CNG. 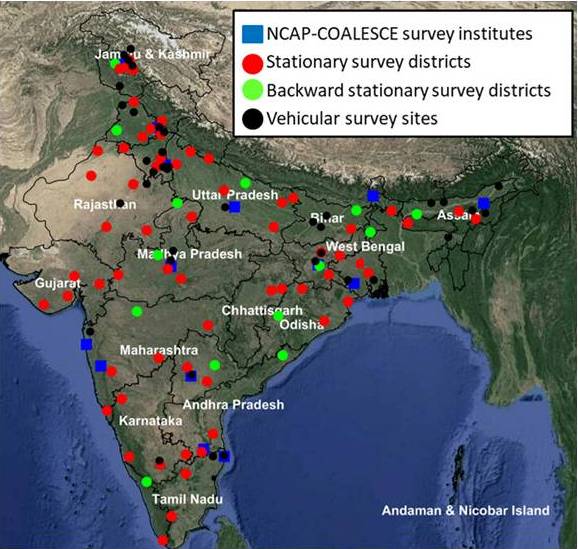 The expected surveys will capture significant geographical spread and diversity in practices across the country. Survey data will be collected digitally using a tablet application and coded information will be transmitted to coordinating institutes using cloud servers in real time.